Alexandre Grivko is the co-founder, art director and chief landscape architect of the international garden design and landscaping company Il Nature, with its head offices operating in Paris and London. Born to a diplomatic family, since early childhood Alexandre was exposed to the best international educational programmes in architecture, horticultural and landscape design.

It was his grandfather, a military attaché, who instilled into Alexandre a keen interest and love towards gardening: in his spare time, the grandfather was actively engaged in planning the family garden. First, he carefully selected the plants and then looked after them. Very quickly, this garden acquired the status of a local landmark. Alexandre’s grandfather attended lectures in various universities and educational institutions as auditing them. Not merely an amateur, he approached the task of setting up and looking after his garden with the seriousness of a professional. When later the Grivko family moved to a country house, Alexandre found a new outlet for his creativity: a garden where he could apply the knowledge and expertise he has learned from his grandfather. That is when he began his independent experiments in gardening, which led to formal education at a floral design school.

He enthusiastically embarked on his new career as a florist, and very shortly afterward received his first commission. This was the beginning of Alexandre’s long and successful career. From then onwards, Alexandre never stopped his professional development and training, always seeking to improve in his area of expertise and master new skills.

He dedicated himself to the thorough study of botany and its various aspects. Subsequently, he gained world recognition for his record-breaking achievement of designing over 500 gardens and developing 100 large-scale private and public garden projects with his team across the world.

Alexandre Grivko’s signature is his ability to combine classic styles with contemporary architectural trends and ideas. Whatever he does, he vows to stay off the beaten track. His passion lies in the creation of experimental public gardens by exploring new ways of arranging spaces and by testing innovative plant care technologies in the process. He also likes to experiment with shaping trimmed plants into grand sculptural compositions. The recurring philosophical motif of Grivko’s work is the transience of time: finding oneself caught between the past and the future, the viewer should experience time’s fleeting nature, understand and accept it. 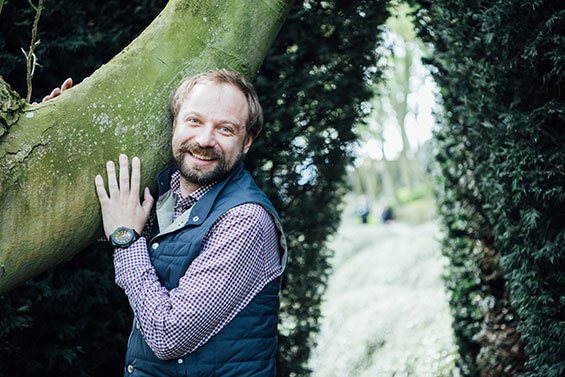 The Landscape Architect That Has Inspired You The Most?

The Garden That Has Changed Your Life?

I was amazed by the garden of Quinta da Regaleira in Sintra, Portugal. But the garden that literally changed my life was my own creation Orekhovno garden in Russia.

Les Jardins d’Étretat is a public avant-garde experimental garden and open-air museum of contemporary art. The gardens sit on top of the cliffs overlooking the iconic “Needle” rock cliff of the Etretat Coast in Normandy.

Les Jardins d’Étretat has a fascinating backstory that renders it, quite poetically, a “Garden with an afterlife.” The captivating story of a French actress’s historic garden has inspired landscape designer Alexander Grivko to join together the past and the future.

In the early 20th century, the actress known as Madame Thébault built a villa on an idyllic plot of rolling landscape in Étretat, France, atop the rocky cliffs of Normandy’s Alabaster Coast. The grounds, which she made into a garden for her orchids, became a favorite painting spot for her friend a painter and dedicated gardener in his own right Claude Monet, who produced many artworks depicting the Porte d’Aval, a natural stone arch in the distance.

The main terrace of Les Jardins d’Etretat offers the historical iconic view over La Manche and the cliffs that are known to have inspired such renown artists as Claude Monet, Jean-Baptiste Camille Corot, Eugene Delacroix and Vassily Polenov.
In 2016, Alexandre Grivko transformed Thébault’s former estate into Les Jardins d’Étretat—a public garden that hosts both permanent and temporary collections of sculpture by international artists. The merit of this project lies in a harmonious coexistence of the old historical garden with contemporary architectural aesthetic ideas, eventually resulting in a neo-futuristic vision of the garden.
Influenced by designer and architect Vito di Bari’s 2007 ‘Neo-Futuristic City Manifesto’, which calls for the blending of art, technology, ethical values and nature, we’ve set about creating an experimental, avant-garde garden.

It took only one year and a half to realize the garden project. We had to work very fast and to accomplish several difficult aims such as transportation and processing of 1000 tonnes of soil on the rocky cliff, construction of 2 km of gravel paths, and last but not least, purchase and planting of more than 100,000 evergreen plants from Belgium, Germany, Italy and the Netherlands under the angle of almost 45 degrees in rough weather conditions with salt breezes from the English Channel.
The 7,000 square meters garden incorporates quite exceptionally the geological and atmospheric density of this stretch of land between the sky and the sea. Les Jardins d’Etretat is made up of seven sections, which cascade romantically down the hillside towards the sea to provide to provide a multi-layered experience throughout the different areas of the garden.
Alexandre Grivko has designed sensory and very imaginative type of garden space, which immerses us into different worlds – with a change of perspective in every respect, with a great feel for the historical origins but also cautiously leading to the future. A space with precise topiaries which captures visitors with the topiary art of Baroque and Renaissance gardens and is equally associated with the modern gardens of Jacques Wirtz. Walls made of azaleas, rhododendrons and camellias form the background for romantic garden.

The project is the winner of the European Garden Award in the category “Best development of a historic park or garden”, possesses one Michelin star in the Green Guide and has the label “Remarkable Garden”

Orekhovno is the first and only European garden in Russia which, despite its status of private property, is open for public. Orekhovno Country Estate is located in the village of Orekhovno, the Pskov region. It belongs to Alexander Grivko, a landscape architect, the designer of numerous private and public gardens in Russia and Europe. Aleksander spent his childhood here. An interest in nature and plants came from his mother, who was in love with her native Pskov landscapes. Many years later, the well-known landscape architect returned to the banks of the Orekhovnitsa river to set up a garden in loving memory of his early deceased mother.

Using his experience and acquired knowledge, Alexander and his partner Mark Dumas have turned five hectares of abandoned veg patches, sliding down to the mud-creek, into a blooming garden. The manor house – a small castle in the Norman style is the central point of the garden. On one side the castle is surrounded by an Italian garden, where on the lawn planted with lilies of the valley, crocuses and snowdrops, a stone Amur bends a bow. On the other side there is an English landscape park with all its traditional features: untailored lines, unclipped lindens and winding paths. The so-called Russian Manor garden is set up on the opposite bank of the river. Clipped bushes are mixed with unclipped ones, bright colors faint and a gothic grotto made of fragments of a 12th-century cathedral looks down the hill at a wonderer. The Orekhovno Country Estate park is an encyclopedia of garden styles: English landscape, Regular Italian and French. Here you may come across some elements inherent in many specimen of European garden art. In essence, Orekhovno is the homage to the historic estate culture. Plants in the park were carefully selected with due regard for the climate of the given latitudes. Evergreen yew and boxwood were replaced by thuja occidentalis. An alley of ten-meter species of this rare type of trees, culminating in a classic balustrade, reproduces a French landscape with cypresses. In Orekhovno one may also find a miniature fragment of an Italian Renaissance garden: with a mirror regular park, patterned plantings, bosquets, ornamental sculptures.

You can find out more about which cookies we are using or switch them off in settings.

This website uses cookies so that we can provide you with the best user experience possible. Cookie information is stored in your browser and performs functions such as recognising you when you return to our website and helping our team to understand which sections of the website you find most interesting and useful.

Strictly Necessary Cookie should be enabled at all times so that we can save your preferences for cookie settings.

If you disable this cookie, we will not be able to save your preferences. This means that every time you visit this website you will need to enable or disable cookies again.